This post may contain affiliate links.
If you buy something from one of the linked sites you won’t pay anything more, but I might make a commission.

My kids could not approach the first day of school more differently if they tried.

Fiona has been counting down. Yesterday she grabbed her school supply list and all of the stuff I’d gotten on Amazon (no waiting on a 100-person line at Staples this year!) and got to work organizing and bagging it up. She packed up her summer homework and quizzed me on what I was going to pack for her first lunch. She unwrapped her new lunchbox and cut the tag off. She set everything out. She was ready.

I’m pretty sure Walt Disney himself would tell her she’s too perky. 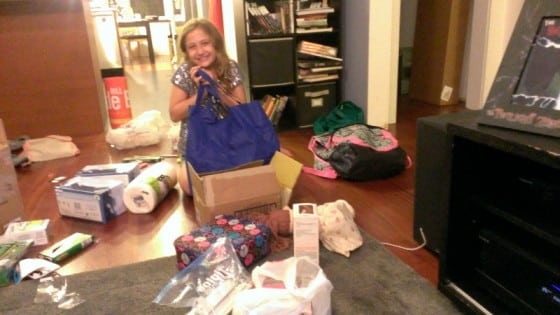 She let me know that she really loves it when I put notes in her lunchbox. I made a mental note, and then immediately lost it.

And then, there was Jake. He made a big show all weekend of breaking down in dramatic sobs every time someone mentioned the “s” word (so of course, Fiona worked “school” into as many conversations as possible).

He grudgingly finished his summer homework and asked me to print it out before Monday morning (which I totally forgot to do, and he forgot that I forgot, and left for school this morning without it).

When it was time to get up this morning, he set his alarm earlier than he needed to, so that he could get in some extra TV time before school – so that he wouldn’t go through withdrawal. I told him I’d made a special breakfast for the first day – banana chocolate chip peanut butter chip bread – and he made a face and asked for toast.

I asked him where his backpack was, and he remembered that it was still packed from sleepaway camp. Whoops. Yeah, I should probably wash that tonight. I’m just hoping nothing crawls out of it at school today.

I tried to get a “first day of school’’ pic, but this was the best I could do:

And then he was off.

When I went upstairs to wake Fiona up, she was already in the shower. She gave me a hug for the banana bread. As I packed her lunch, she (thank goodness) reminded me that she loves notes in her lunch. As I scribbled something on a piece of paper I wondered to myself how I ended up with such a sweet, sincere girl? I’m pretty sure a note in his lunchbox would make Jake roll his eyes – I know I would roll mine. But I played along for her sake and wrote a sweet note. And even remembered to put it in her lunchbox.

I walked her to school, and had no problem getting her to pose for a picture:

I got to watch as she met up with old friends and met her new teacher.

That’s something I miss out on with Jake, since he goes to school by himself. I really hope he had some nice reunions. Although instead of hugs and squeals, I’m guessing there were cool nods of acknowledgement, and maybe a “What’s up?”

And now it’s just me and the banana bread. Possibly the best one I’ve ever made. It was my first time trying this recipe (Decadent Banana Bread, page 9). I skipped the nuts, and used 1/4 cup chocolate chips and 1/4 cup peanut butter chips. You could easily dump in more chips and make this closer to a dessert, but that amount of chips was just enough to get a little chocolate and peanut butter flavor (so great with banana!) without it being overpowering or too sweet.

The best part was that putting this recipe together was super fast. It has to bake for an hour, and then I cooled it overnight. Perfect for a quick but delicious breakfast – at least for the kid who ate it!

Somehow I don’t think I’ll have trouble keeping myself busy until 3pm.

Have a question about this recipe? I may have answered it here.