You are here: Home » Joely Fisher basically has my dream career 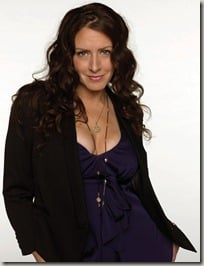 So if I could pick a career path for myself, it would definitely include Broadway musicals, hit movies, long-running TV shows, and charity work helping everyone from poor kids around the world to terminally ill adults to whales. But that’s Joely Fisher. The daughter of actress Connie Stevens and singer Eddie Fisher, Joely grew up going to work with her mom and sleeping in orchestra pits.

You probably first got to know Joely, as I did, during her long run as Ellen DeGeneres’ friend Paige on Ellen in the 90s.

Her latest TV hit, the sitcom ‘Til Death, just went into syndication, and I got the chance to interview Joely over the phone. I was fascinated by what I imagine was a glamorous upbringing. Not surprisingly, her answers were always interesting and often hilarious.

First, I asked Joely if growing up with the parents she had was like growing up in the Sound of Music house, with everybody breaking into song all the time. She told me about a recent birthday dinner she had at an old-school L.A. restaurant, with her mother and singer/actress Lainie Kazan.

This piano player starts playing every old standard song that we all knew and literally we sang for three hours. The restaurant stopped in its tracks and got a full Broadway scale musical in the restaurant, it was hilarious and that is basically it. That is my life in a nutshell.

I have spent my life with some incredible iconic performers sort of wandering in and out of my house and you know, for me that was normal, that was my life and for everybody else out there it probably would be fairly fascinating to walk into your living room and see Lucile Ball sitting at the bar with my mom, you know, having a Manhattan and smoking a cigarette, in the late ‘70s.

My second question for Joely was about how her childhood experiences, following her parents around as they worked and performed, differ from her children’s lives (she has two step-sons and three daughters), and if she has so often chosen television work because it offers more stability for bringing up a family.

Well yes, I had sort of a smattering of all different kinds of experiences. My mom worked on stage and in television and movies and so I sort of, I wouldn’t say I was dragged along because I really went willingly. I loved being in the wings watching her perform, she was magical.

And the concert mistress who plays the lead violin in the orchestra said, “Shh, I have Joely.” And she was holding me and I had fallen asleep in the orchestra pit. And when I woke up my mom said, “Joely you can’t, you know, honey you can’t, you know, I’m not angry.” And she was trying to explain that I have to tell people where I’m going and I told my mom that I wanted to hear the music from the inside. And she was like oh my God, I can’t stop her with a train, this is going to be her life, you know.

So as far as giving that to my own children you kind of want to take the best of it, I mean my mom called me the gypsy because I truly was, I loved it, I mean I came out of the womb singing, I literally did.

And my daughters basically have grown up on sets but they’re at the age where they don’t miss school to go traveling with me, you know. I did perform on Broadway before I had children, I was offered another show and thought, I kind of want to be the last face that they see at night when they go to sleep and the first one in the morning. And I wasn’t ready to hand that over to somebody else, you know, a caregiver.

So they’ve grown up on sets, they love it. You know, my daughters are into it. One of my daughters, True, who is five says “I don’t want to be pictured.” She doesn’t want her picture taken. So if we go to an event she skips the red carpet and that’s fine with me. I don’t want to force that on anyone because it has wonderful gifts and it also can be stressful.

But my daughter Skylar, I was pregnant and did a pilot pregnant, they shot around it and she learned to walk on that set. True was six weeks old when I did the pilot of ‘Til Death, I nursed her during the pilot, ran up to nurse her because my boobs were getting bigger than my head.

And Luna who I adopted at birth, she’s my baby, I adopted [her] during the run of ‘Til Death and so they were all weaned on a set and they know when to be quiet when the cameras are rolling and as long as they love it I’ll bring them and, you know, the other stuff, we lead a more normal life.

You can check your local listings to see when ‘Til Death is on in your area, and the show’s official page is here.