You are here: Home » NYC subways are the great social equalizer

I read an interesting article about how to fix NYC subways. But it had one major flaw. 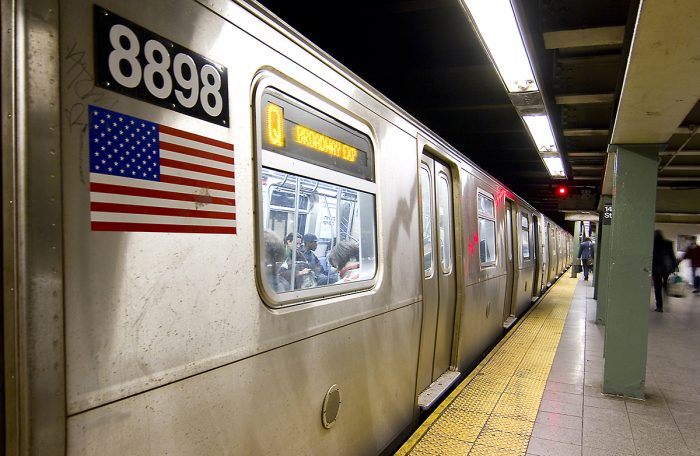 Earlier this month, on a hot and swampy New York City day, I was trying to get my daughter to a doctor’s appointment. I knew there was trouble as soon as we got to the subway platform, because it was way more crowded than usual. That always means that a train hasn’t come in a while. In this case, quite a while.

Despite being born and raised in NYC, whenever we leave the house my daughter asks if we’re driving. At this point I think she just does it to annoy me, because the answer is almost always an incredulous “No!” And it’s a definite no if we’re going from our home in Brooklyn to any place in Manhattan. It will invariably take us longer to drive than to take the subway, and when we get to our destination we’ll either drive around for forty-five minutes looking for parking, or pay $40 for the privilege.

But on this particular day, as the wait on the sweltering platform stretched past the twenty-minute mark, I started to wonder if driving would actually have been quicker. We were almost surely going to be late for her appointment. I called the office to warn them, knowing that if we got there less than ten minutes before our appointment time, we would be considered late and would have to wait until the doctor had a break in his schedule (before you decry that as unfair, that office runs like clockwork, so I’ll take it).

When a train finally came—late due to a signal problem—it was the most packed train I’ve ever seen in my twenty years of living here. It was comically full. If we were trying to do anything other than a doctor’s appointment I would have waited for the next train. But I couldn’t do that, so I pushed my daughter in ahead of me and forced myself in, hoping that the closing doors weren’t going to slice my protruding ass off. I could hear the TV news reporter now: “Trains in Brooklyn came to a halt today when a woman got her size 16 butt stuck in the subway doors. Film at 11.” Because of course there would be film.

But all of me made it on. Not so for a guy who tried his hardest to get on but was left on the platform. In situations like that I would normally yell for people farther into the train to squeeze together and make more room, because no matter how crowded things are near the doors, the people in the middle always think they’re doing enough. But not this time: there was not a scrap of daylight between anybody on that car.

So there we all were, squished together like wet crayons in a metal box. The often too-chilly air conditioning wasn’t even noticeable with all those people packed in. I had nothing to hold on to, and couldn’t help but think that if the doors malfunctioned and opened while we were moving, I’d be a goner.

We got to our destination eventually, the train stopping between every station, waiting for trains ahead to move. We crawled into the city, and thankfully we were only going a couple of stops in. We’d survived.

I thought about that scene today as I read this piece in The Atlantic about how NYC’s subway system is irreparably broken, and needs to be fixed with innovative new ideas, not multi-billion-dollar bandaids on the current system. And the idea proposed is kind of amazing: take out the tracks, and run self-driving pods through the existing tunnels. Without people and bicyclists and intersections, the self-driving technology would have a lot less to deal with.

Ramps would be built in each station to let people on and off of the pods, so that they would only stop when they got to your destination, without blocking traffic behind them. The tunnels would be lit, and selling billboard space would bring in extra revenue. The pods could carry food and other goods during off hours, bringing in even more revenue. Genius, really!

But then, the article went sideways. It proposed decking out different cars with nicer chairs or workstations, even gold-plated, leather-bound cars for those who wanted a more luxurious transportation experience. Um, no. And let me tell you why: because when my daughter and I were packed onto that sweltering car, everyone was smushed, and hot, and smelling things they didn’t want to smell. And that’s the way it should be. I mean, it ideally should never be that crowded and hot, but everyone on every car should be—if you’ll excuse the expression—in the same boat.

The subway is basically the last place in NYC where you can’t pay for a better experience. There is no VIP subway pass. There are no reservations. Everyone goes through the same turnstiles. If you want a nicer experience, you have to take your chances up above with the traffic. The guy who works on Wall Street is at the mercy of a stalled train the same as a woman going to a fast food job. Kids going to school get the same treatment from the subway gods as friends going to lunch.

If people with more money can opt out of the problems in the subway system like they can with so many other things here (failing public schools, crowded and crumbling housing, food deserts, etc.), then they will immediately stop caring about how the subway is running. If their little pod is clean and on time and stocked with bottled water, they won’t pay any attention to how the “economy” pods are running. Do you think the people flying first class care if the rest of us get our peanuts back in coach?

I’m all for innovation in our subway system. But not if it leads to more class warfare in a city that already has plenty.