You are here: Home » Ten Things to Be Aware of before You Give Money to a Charity, Political Group, or Other Organization 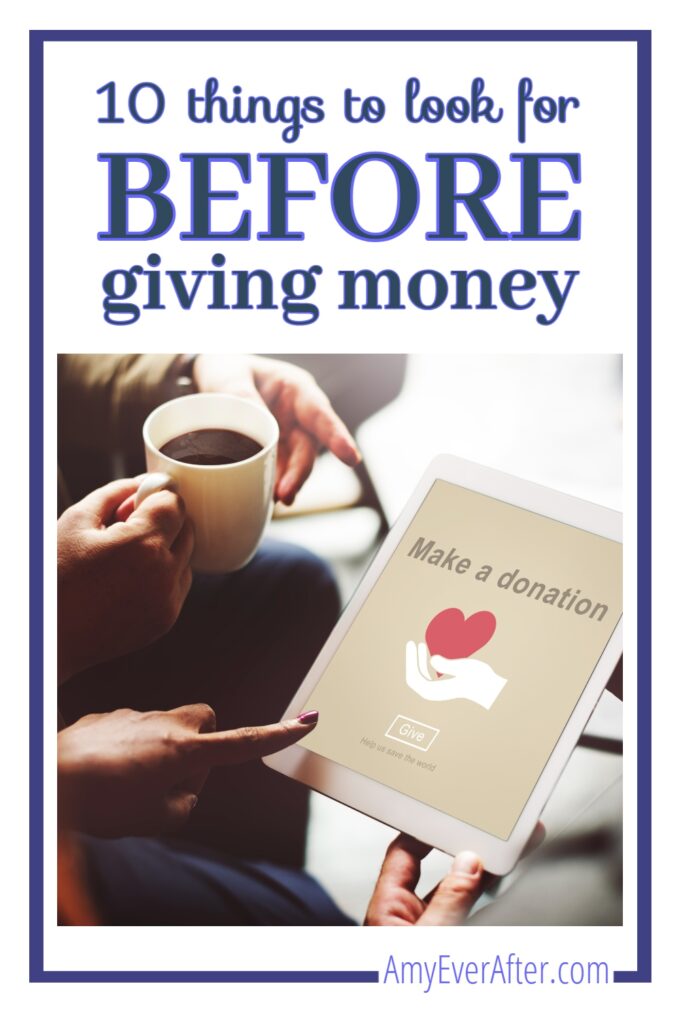 Giving money online, whether to a charity, a social justice organization, or a political group, can be a great way to help a cause. But there are some things that you should be aware of, so that you don’t get scammed, and your money gets used the way you want it to. And if the group is doing either of the first two things on the list, do NOT give your money to them!!

I’ve posted a list of sixteen great organizations to give to that fight for the rights of women, BIPOC, AAPI, LGBTQ+, and more. And while none of those groups engage in anything questionable on their donation forms, some very shady groups (especially political ones) have started using awful, deceptive tactics to scam their donors out of money.

So, I thought it would be helpful to list some of the things to look out for when donating money to a cause.

Not everything listed below is bad, most of them are just things to be aware of and check for. After all, if you believe in a cause, you want to make sure your money is going to get to it, and be used in a helpful way.

But if the group you’re giving to is engaging in the first or second item below, you should rethink giving to that group.

And whenever you give to a group for the first time, it’s always a good idea to monitor your credit cards and accounts. Check that the correct amount was charged or taken out, and then check again after a week and a month to make sure that more money wasn’t taken out without your knowledge.

Don’t give to a group doing these things:

Some groups hide boxes that alter your intended donation in some way. Sometimes they put them in the fine print or on a part of the donation page that you’re unlikely to look at, or they use some other tactic to make them really hard to see.

And they pre-check those boxes, giving themselves permission to take your money repeatedly, even if you only meant to donate one time. They leave it up to you to find the box and uncheck it.

Some of them even trick you into giving weekly, or into giving double the amount you meant to! Don’t fall for these scams. And if you already have, contact your state’s attorney general, and then do everything you can to try to get the money back. If you donated by credit card, it can be especially effective to contact your credit card company.

A reputable group will NEVER insist that you give to them via a wire transfer, or with gift cards, or through Western Union, or with cryptocurrency (accepting crypto is fine, it just shouldn’t be the only option).

The safest way for you to pay is always with a credit card. The charges can be disputed, and there’s a clear record of the transaction. Sending in a check is also a good option. If neither of these options are available, do not give money!

Check for these things before you donate

Even if you’re donating to a group that you trust completely, you should still look out for boxes that are automatically checked for recurring donations. As long as these boxes are easy to see and in the immediate area where you’re entering your donation, I don’t consider this deceptive (but I still wish groups wouldn’t do it).

Of course, if you want to make a recurring monthly donation, that’s fantastic! When groups know how much has been pledged for future donations, they can plan better.

Many charities have a box that you can check to cover the administrative costs of your donation. This is usually a small amount, between two and four percent, and it really helps the group out.

For example, if you’re about to donate $100 to a group, they might ask if you want to donate an extra $4 to cover their administrative costs. This way, 100% of your intended donation amount can go towards helping.

Some organizations might publicly display your name and the amount you gave, unless you check a box saying that you want your gift to be anonymous (it won’t be anonymous to the organization, they need your info for their records).

If you don’t want your name and/or donation displayed publicly, make sure you check that box.

Many companies will match your donations to charity! Look for a place on the donation page to check for your company, and you might be able to double the good you’re doing.

Donating in someone else’s name

I love doing this. Not because I’m a good person, but for spite. If someone pisses me off, I like to make a donation in their name to a group they hate.

However, most people do this for good reasons, like honoring someone who died of a disease or who works hard for a cause. If you want to honor someone in this way, look for a place on the donation form to put that info.

Some sites will pressure you to make an account for easier giving, either before or after you donate (ActBlue is especially aggressive about this).

While having an account will make things speedier the next time you want to give, you don’t have to have an account — trust me, they’ll still take your money.

When you give to a charity, some amount of future communication will be necessary. At the very least, they will be mailing or emailing a receipt stating how much you gave, so that you have proof for your records and taxes.

But if you don’t want to be contacted in the future about another donation, or other campaigns, or volunteer requests, or you don’t want them to share your information with other groups, look for a box you can check to opt out of further communication and information sharing.

And while I totally understand why groups really want to communicate with you in order to get more donations and keep you up to date on what they’re doing, those emails can get overwhelming, especially if you give to a lot of different groups.

If you don’t want to cut them off completely, look for an option to receive emails periodically, like a once-a-month summary. And I would really like to encourage groups to give this option. I will almost always choose an occasional email over unsubscribing completely.

Also, avoid giving your phone number. Groups don’t need it in order to process your donation, and I’ve found that text messages are the most difficult kind of communication to stop (reputable groups will give you an easy option for stopping the texts, but once your number is out there, it’s hard to keep it from the more annoying groups).

One exception I’ve found to this is groups (usually smaller ones with less sophisticated websites) that use a basic merchandise order form to take donations. Since deliveries often require a phone number, sometimes that info has to be filled out in order for your donation to go through.

It can be easy to think you’re making a tax-deductible donation to a group, and then at tax time you discover that it wasn’t. If it’s a sizeable donation, you might be counting on that deduction, so it’s a good idea to make sure.

There’s a big misconception that as long as the group you’re donating to is a non-profit organization, your donation is tax deductible. That’s just not true.

Some organizations have both a 501(c)(3) and a 501(c)(4) to donate to. For example, they may have a group that engages in charity work, a small amount of direct lobbying, non-partisan political activities (like voter registration), and other things that are OK for a 501(c)(3) to do. And then they might also have a more political arm that does a larger amount of lobbying, and endorses political candidates that are friendly to their cause.

Both kinds can be non-profits, and donating to either type will probably help the organizations to do good things, but you may have a preference for donating based on where you want your money to go, or whether you’re itemizing your tax deductions.

There’s a good breakdown of the differences here, but again, check with a tax professional.

Often, if you click on a site’s “Donate” button or link, it will take you to their 501(c)(4) donation page, and then have a link from there to the tax-deductible donation page. They want your money, but they’d rather it go to the fund that has more freedom in spending it.

How to search for tax-exempt status

When in doubt, you can search for an organization’s tax-exempt status yourself through the IRS.

In the “Select Database” dropdown, select “Pub 78 Data”, and under “Search By” choose “Organization Name”. Enter the organizations name under “Search Term” and then click “Search”.

If you get a result for the organization, then your donation should be tax-deductible. Just make sure you donate to the exact name in the results, so that you don’t confuse a tax-deductible donation for one that won’t get you a deduction.

Note that if you click on an organization in the results, and then go back to the form to search again, the “City” field will have the location of the result you just clicked on. Delete the city before searching again.

Looking for places to donate?

I’ve put together a list of sixteen great organizations that I’ve donated to recently. They fight on behalf of women, minorities, immigrants, and other groups whose rights are under attack. They would all appreciate your donation. But if you can’t donate, check back here soon for a post about ways to help organizations that don’t involve you sending in money.