You are here: Home » 15 Things You Can Do to Stop Child Sex Trafficking 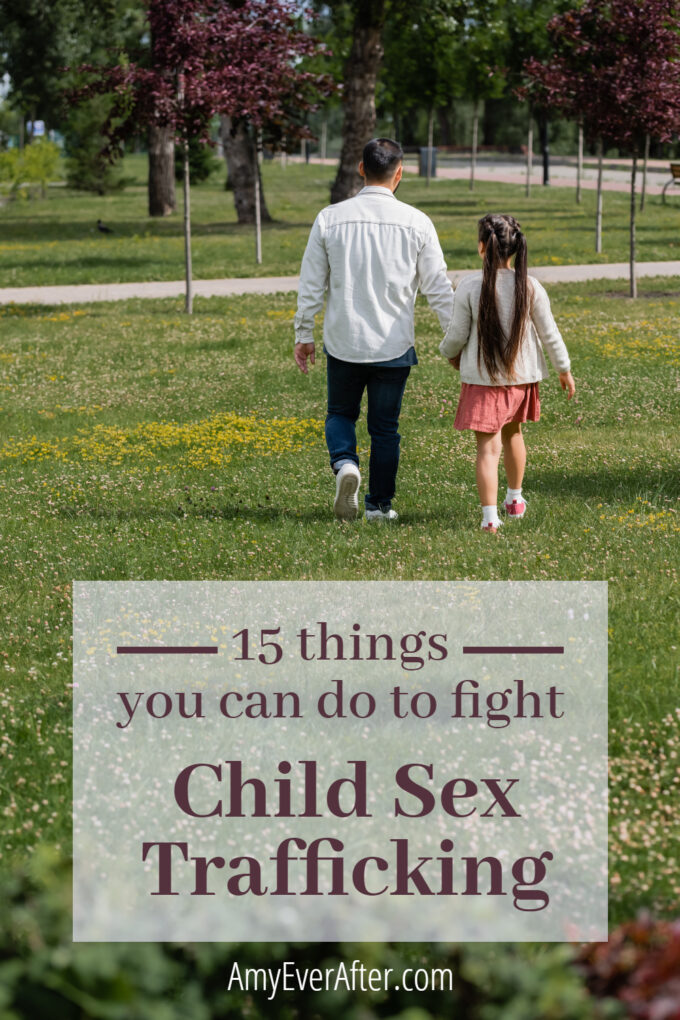 Child sex trafficking is real, but it doesn’t happen like most people think it does. And many of the actions that well-meaning people take aren’t just ineffective, but often make the problem worse! The good news is there are things you can do that will help to stop child sex trafficking.

This post is sponsored by Polaris. Unless otherwise noted, information about trafficking is from the Polaris website and social media channels.

Contents show
Good intentions
Misleading images
Abduction stories
Conspiracy theories
Better safe than sorry?
How spreading those stories makes things worse
What is trafficking?
Which children are vulnerable?
Why don’t the victims just leave?
So what CAN you do?

I truly believe that most people have good intentions when it comes to keeping children safe. The average person doesn’t wake up in the morning and say, “How can I make the problem of child sex trafficking worse today?” But with all the good intentions in the world, that’s what happens a lot of the time when people try to help because often we have false impressions of what child sex trafficking is, who is doing the trafficking, and how it happens.

So what kinds of false information are we unwittingly spreading?

Maybe you saw a picture of a young girl with light skin and terrified eyes, a man’s dark hand over her mouth, with a plea to share it and raise awareness. The post doesn’t offer any solutions or any groups to contact, but of course, you share it because you feel sorry for anybody in that situation. And while the post is short on specifics, you feel like maybe sharing it will help somebody to do something.

Or you read a story on Facebook, shared by a good friend, who heard it from somebody she knows and who swears it’s true: This woman was shopping at Walmart with her eight-year-old daughter and they kept seeing the same man all over the store, like he was following them, looking at the little girl. The mom made sure to hold the girl’s hand the whole time they were in the store.

When they got outside they didn’t see him, but there was a white van parked next to their car. The woman called the police, who told her that she did the right thing, because the man was probably planning on snatching her daughter and selling her to a child sex trafficking ring that was operating in the area.

You don’t know if the story is true, it sounds like it could just be coincidence. But what if it was true, and you didn’t make your friends aware? What could it hurt to share the story with your circle, so that everyone can take extra precautions?

Perhaps, as I did, you read that online furniture market Wayfair was selling metal storage cabinets, shower curtains, and pillows for $9,999, and each one had a girl’s name, and this was code for buying a kidnapped girl with the same name, who would be delivered to the buyer. Internet sleuths had tracked down missing child posters for so many of the names, could that really just be coincidence?

You weren’t quite sure you believed it, so you shared it with your local parenting group, asking them what they thought.

I call it “Just In Case” Syndrome. You’re not totally sure if the story is true, but you would never be able to live with yourself if the child of someone you knew became a victim, because you didn’t warn them when you had the chance. Better safe than sorry, right? It can’t possibly hurt to spread the story around, you think, but it could cause real harm if you don’t. And while you’re at it, maybe you’ll call a child trafficking hotline to make sure they’re aware of what’s going on. Because you’re a good person, and of course you’re against child trafficking! You’ll do what you can, just in case your actions could help someone, never thinking that they could actually be making things worse.

I’ve even heard stories from friends about how they were targets for these fake stories because of their religion, because they had a social media following, or because they had a popular blog. All of them thought they were doing something to help. And while they eventually realized the truth, it was too late to erase what they had done.

What’s that saying about a lie getting half-way around the world before the truth gets its shoes on? That’s always been true, but now social media is helping lies to spread at an exponential rate.

There is absolutely no evidence that those examples I gave were true, but they’ve been flying around the internet for a while now. So how do they actually make things worse?

For one thing, they paint a false picture of what child sex trafficking usually is. How can you stop something if you’re looking for the wrong thing? A lot of people think that kids and teens who are forced into having sex are abducted by strangers and held captive by force in order to be trafficked, and that if they could just escape their kidnappers’ clutches, they’d be free. Have you seen the Liam Neeson movie Taken? That movie has probably done a lot of harm, by giving people a very false sense of the kinds of dangers their kids face.

Those viral stories also take resources away from actual child trafficking cases. The National Human Trafficking Hotline, run by Polaris, was inundated with calls about the Wayfair conspiracy, taking their attention away from people who were in real-life dangerous situations.

The Wayfair conspiracy also affected the very real kids who were linked to the supposed sales. In one case, a teen had run away for a couple of days, but had been found safe. Months later, when her “missing” poster was found online matching the name of one of the expensive cabinets on the Wayfair site, her parents – still recovering from the ordeal of not knowing where their daughter had been for 48 hours – were now wondering if their child was being targeted by a sex ring. Her world was turned upside-down and her parents wouldn’t let her out of their sight.

The truth is, trafficking victims aren’t usually held by force, kids rarely get snatched up by strangers, and well-known companies aren’t selling kidnapped children out in the open on their websites. But most people have such a skewed view of what child sex trafficking is, it’s hard to blame them for being misled.

Honestly, I think a large part of the problem is in the word “trafficking”. When most of us think of traffic, we think of driving with a bunch of other cars, trying to get somewhere. Or stuck in a traffic jam. Or beating the traffic so that we can get somewhere faster. It’s all about getting from one place to another.

Therefore, when we hear the phrase “human trafficking” our brains immediately think about humans being moved somewhere against their will. But while the noun “traffic” does have to do with moving vehicles, the verb “traffic” means to deal in something illegal. It has nothing to do with travel.

Trafficking doesn’t need to involve moving a victim. Tragically, it can happen without a child even leaving their own home.

Most children are trafficked by someone they know. Many children even attend school while they’re being trafficked. They have access to phones and the internet, but have no idea what to do, because as bad as their situation is, they might be more scared of the unknown. Who will they live with if they get their parents in trouble?

When talking about the human trafficking of adults, the definitions are a little more complicated. Child trafficking is easier to define because children aren’t able to consent in any way to what’s being done to them. If a child is made to perform sexual acts in exchange for something of value, that’s child sex trafficking. And the thing of value, whether it’s money or drugs or something else, usually isn’t even going to the child. They’re being sold to benefit their trafficker.

Which children are vulnerable?

Child traffickers are really good at zeroing in on a child’s vulnerabilities. Maybe the child craves love and attention, or acceptance. Maybe they want a stable home. Maybe they want more freedom. Or drugs. Or alcohol. Whatever it is they want, the trafficker will use those wants to gain the child’s trust.

For younger children, their trafficker is often a relative. They might not even know that something unusual is being done to them, if that life is all they’ve ever known. They’re being trafficked by someone they trust and whose love they want.

Among older children, the most vulnerable are runaways, kids in the foster care system, LGBTQ kids who aren’t accepted as they are by their families, and kids who have been abused. The trafficker can give them things and feelings they don’t get at home. Once the trafficker has a hold on them, they can manipulate the teens into doing whatever they have to in order to keep getting what they need.

Why don’t the victims just leave?

I think that for some people, the hardest thing to understand is that many of these victims could just walk away at any point, but they don’t. When you have a home, when you have stability, when you have people around you who care about you, it can be difficult to imagine being “forced” into having sex without a gun to your head or being tied up.

For one thing, often they don’t see themselves as victims. They tell themselves that they made the choice to stay and that it’s better than whatever is waiting for them back home. They might also be addicted to something that their trafficker is supplying them with, and if they leave, they won’t get that thing anymore.

Often the trafficker will isolate the victim and convince them that nobody back home loves them, that there’s nothing to go back to. I was struck by this quote from an FBI agent who works in the Violent Crimes Against Children Unit: “They don’t think they are worth saving. Sometimes we are the only people in their lives who haven’t given up on them.”

So what CAN you do?

Child sex trafficking can’t be stopped overnight. I actually wish there was some shadowy group in charge of it all, because then there would be one enemy to fight against. But the causes of trafficking are complicated.

Still, there are things we can do that will actually help. Here are 15 of them.