You are here: Home » How to arrange flowers in a vase

This post may contain affiliate links and/or codes.
If you buy something using one of the linked sites or codes, you won't pay anything more, but I might make a commission.
Jump to How-To

If you don’t know how to arrange flowers in a vase, don’t worry. I didn’t either. I was given a lesson, and I took what I learned and applied it to cheap grocery store flowers! See what I did, with step-by-step instructions on how I did it. 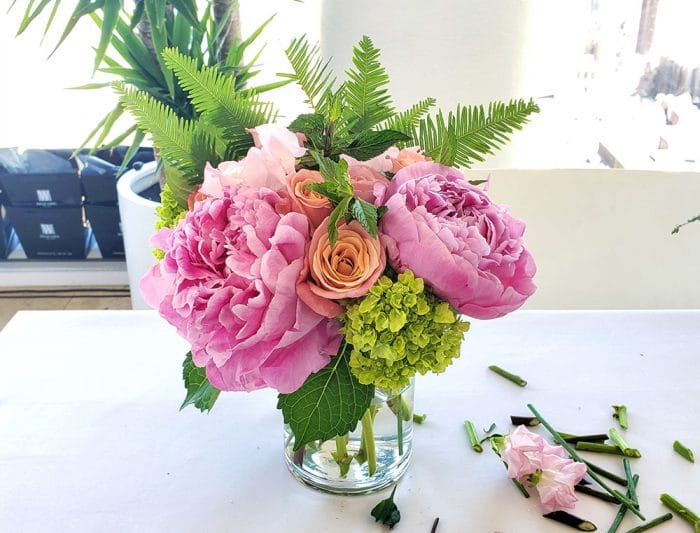 How to make flower arrangements

Last week I wrote about an event that I went to hosted by Honeywell, where we learned about seasonal allergies and how to alleviate their symptoms. It was an informative event, and came with a delicious breakfast and a great view of Manhattan:

But they aren’t, because their pollen is very heavy and isn’t carried around on the wind very easily. If you’re allergic to flowers, you have to be fairly close to them to have an allergic reaction.

The event ended with a fun flower tie-in: Stacy Neylan of Winston Flowers gave us an informative but simple lesson on how to arrange flowers! 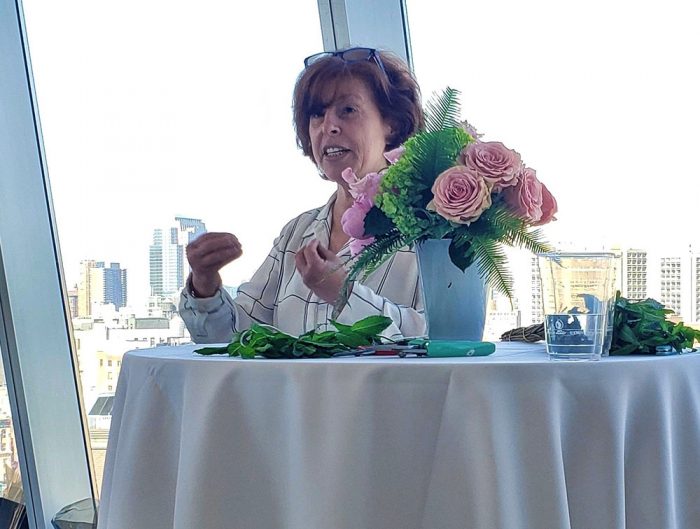 I was excited about this, because I never know what to do with flowers. I usually just take them out of their wrapping and plop them in a vase. And they look fine, but not great.

How not to arrange flowers

However, in this short lesson, I was able to identify three things that I was doing wrong with my flowers at home:

Knowing what I was doing wrong, I was able to start doing things right!

A lesson in how to arrange flowers in a vase 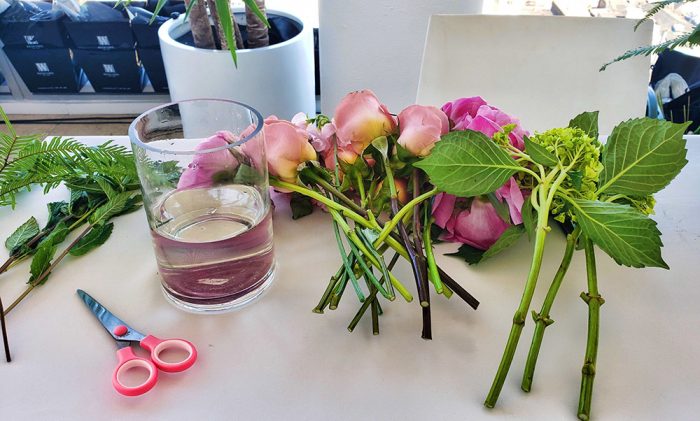 For our lesson, we had all of the components of a great flower arrangement. Stacy led us through the basics:

In the end, we all had gorgeous vases of beautiful flowers that we got to take home. 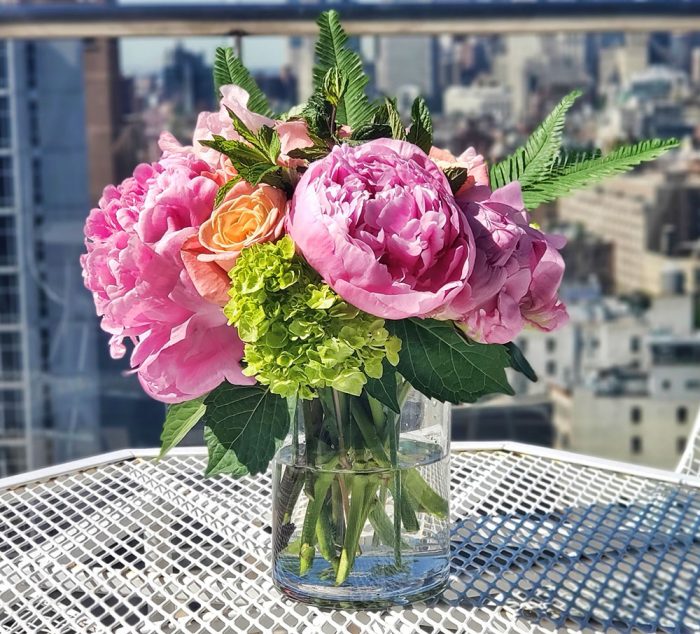 What about cheap flowers?

But I knew that these were really good quality flowers. Plus, we’d been given a selection of flowers to use that would fit in the vase. What about if I were completely on my own, with the cheap flowers from my grocery store? Would I still be able to make something pretty?

I bought two bunches of flowers and took them home to try. 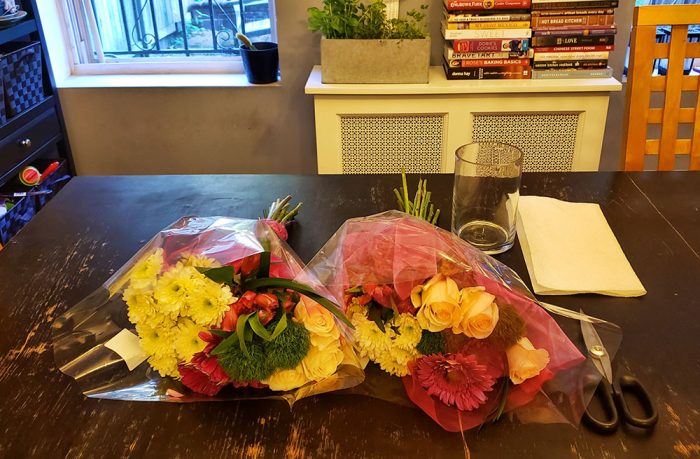 In the end, I was able to make three separate arrangements! 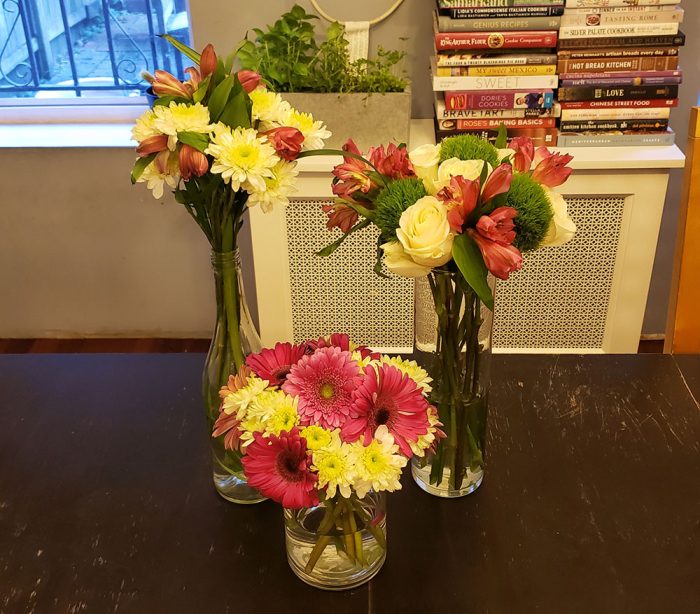 I started with the vase I’d brought home from the event. I liked the way the pink and white flowers looked together, so I just used those. They were different colors and sizes, but still had the same basic look. 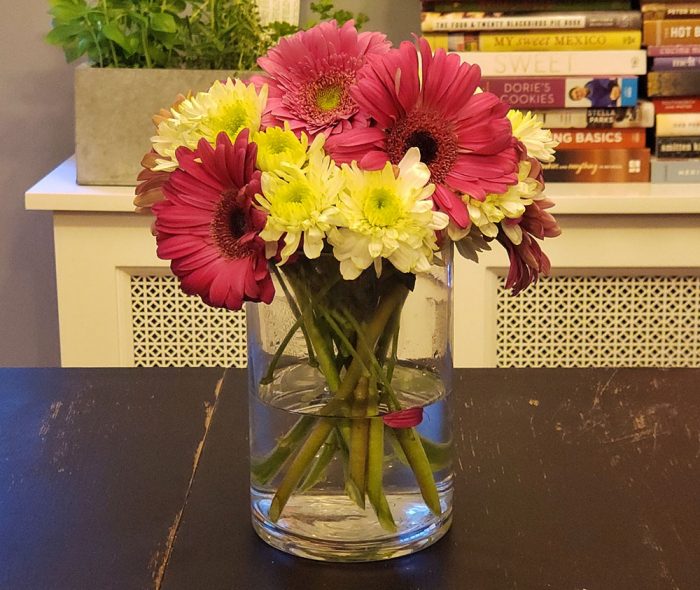 Once that vase was full, I started on a taller vase of my own. Since all of the remaining flowers were pretty much the same size, I used the roses as the anchors and filled in with the other flowers. 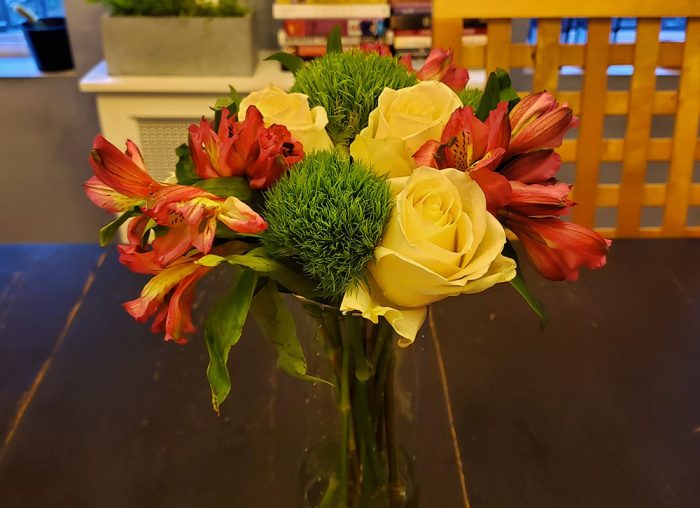 I loved the first two. The third one, in the wine bottle? Well, that was just literally the leftovers. Someone else might have just tossed them, but I didn’t want to. So while it wasn’t the prettiest of arrangements, I was happy that I wasn’t wasting any flowers. 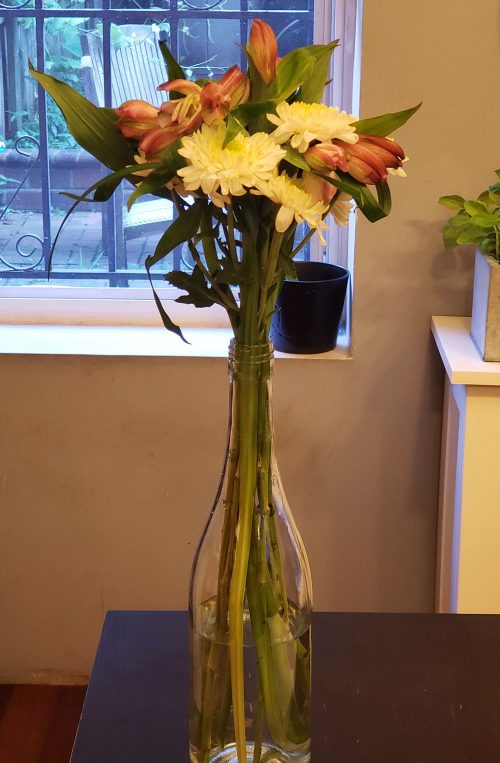 I think I did pretty well for my first time solo! If I can take ordinary flowers and turn them into something I’m proud to display, you can too. 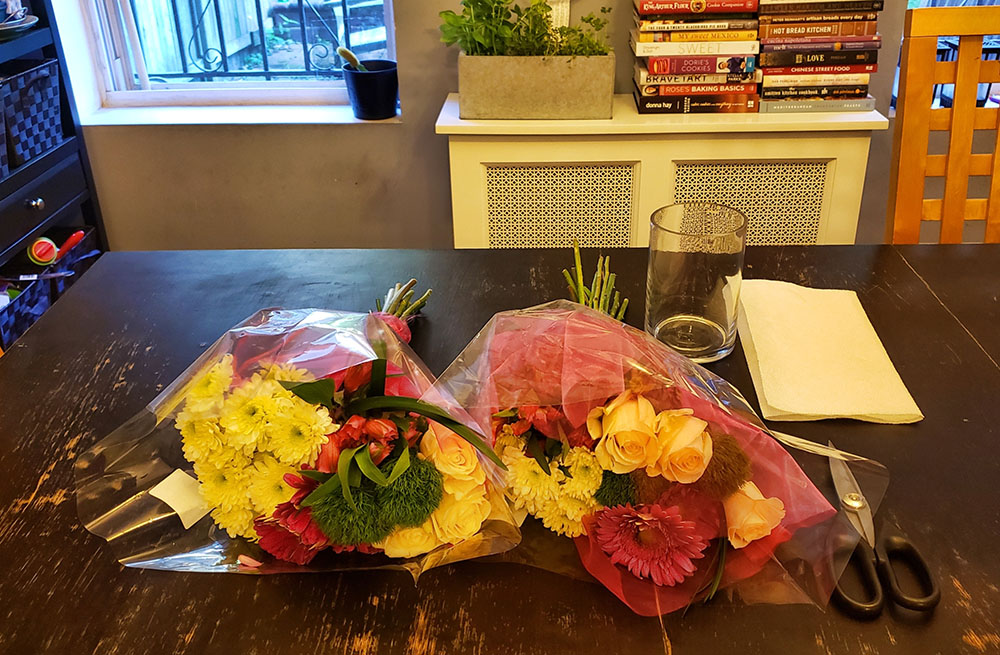 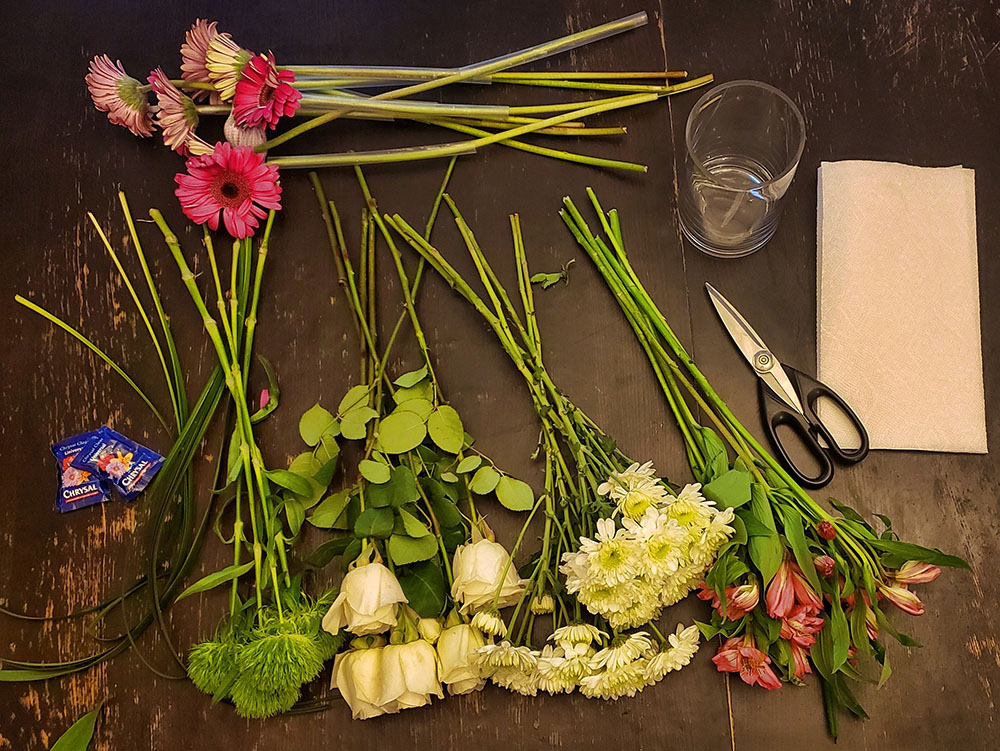 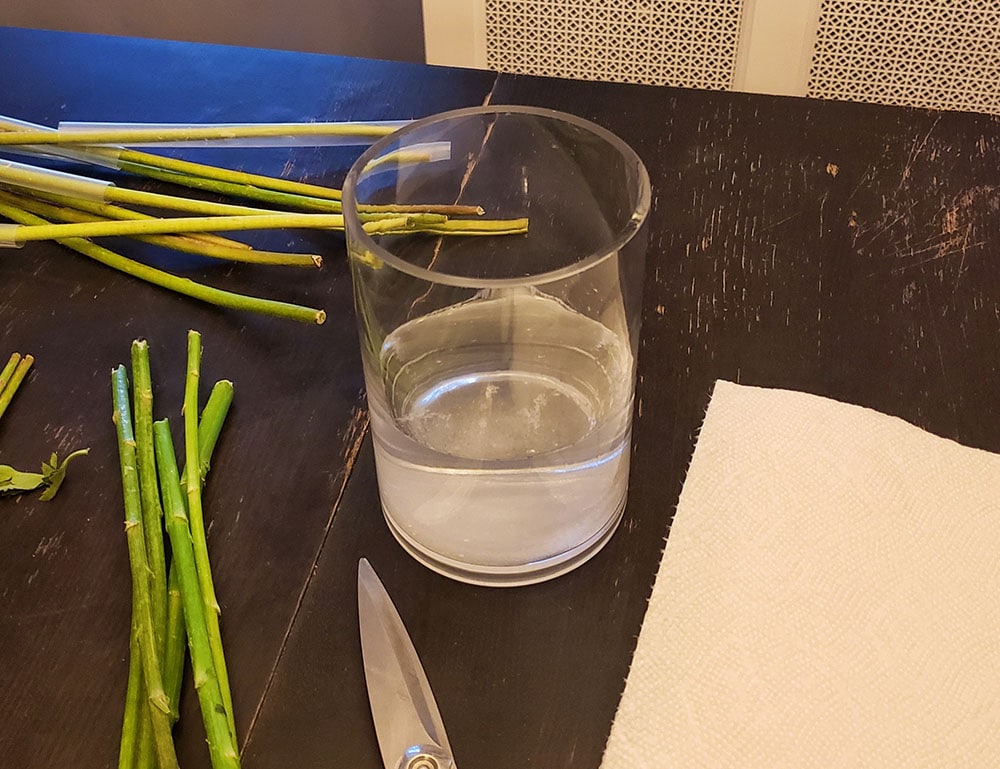 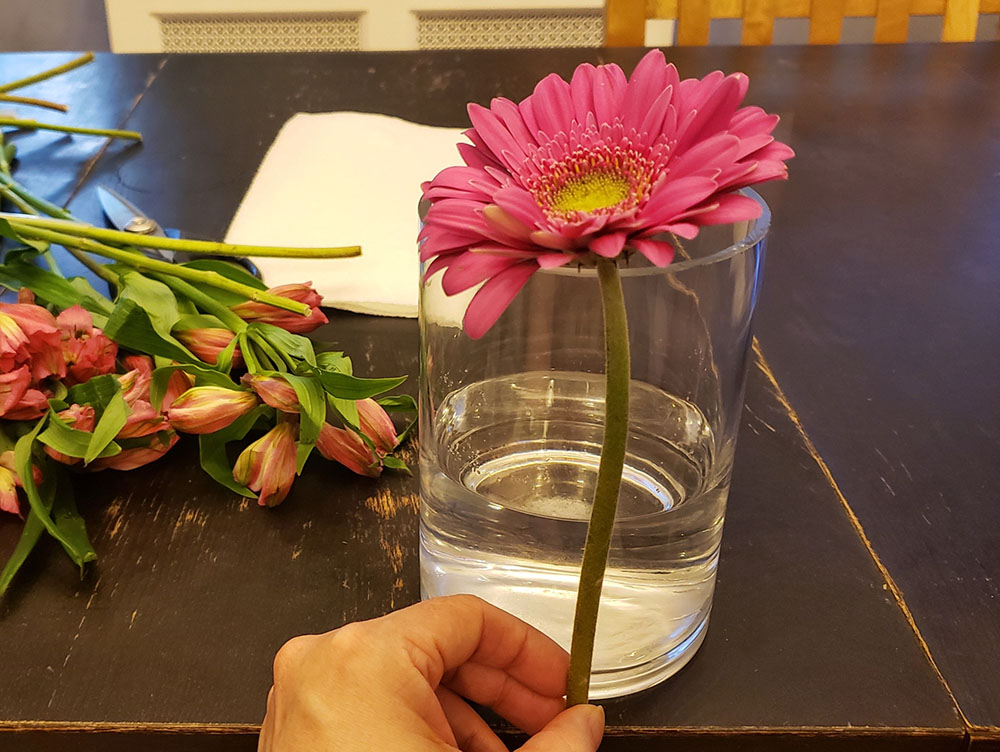 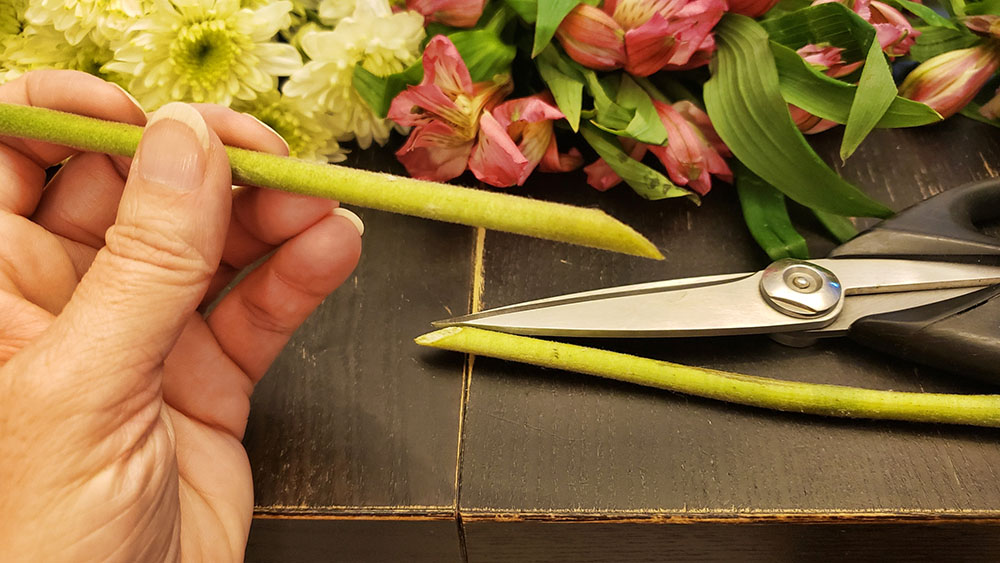 In the image below, you can see that the stem on the left can't lay flat against the bottom of the vase no matter how slanted it is, but the one on the right can, and won't get any water 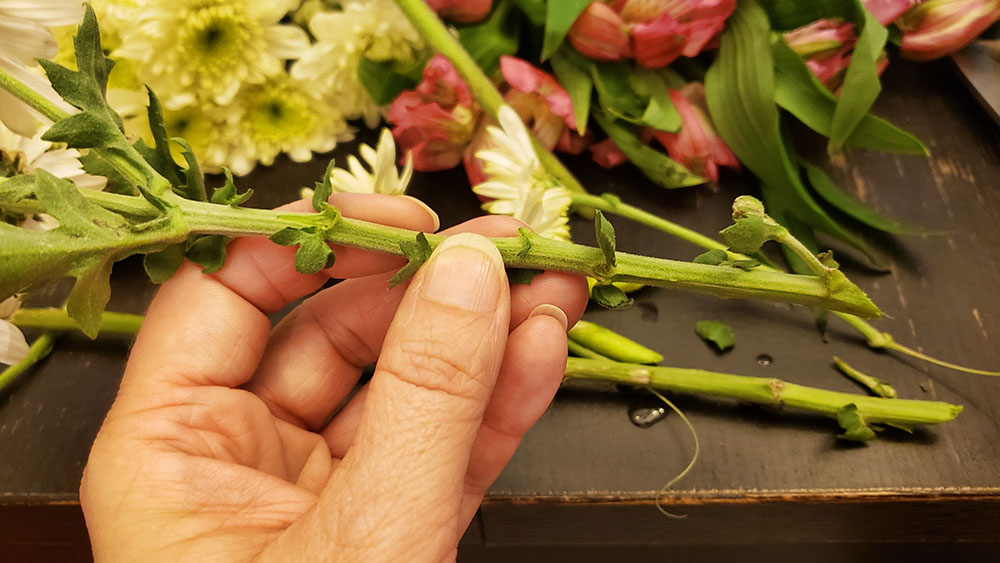 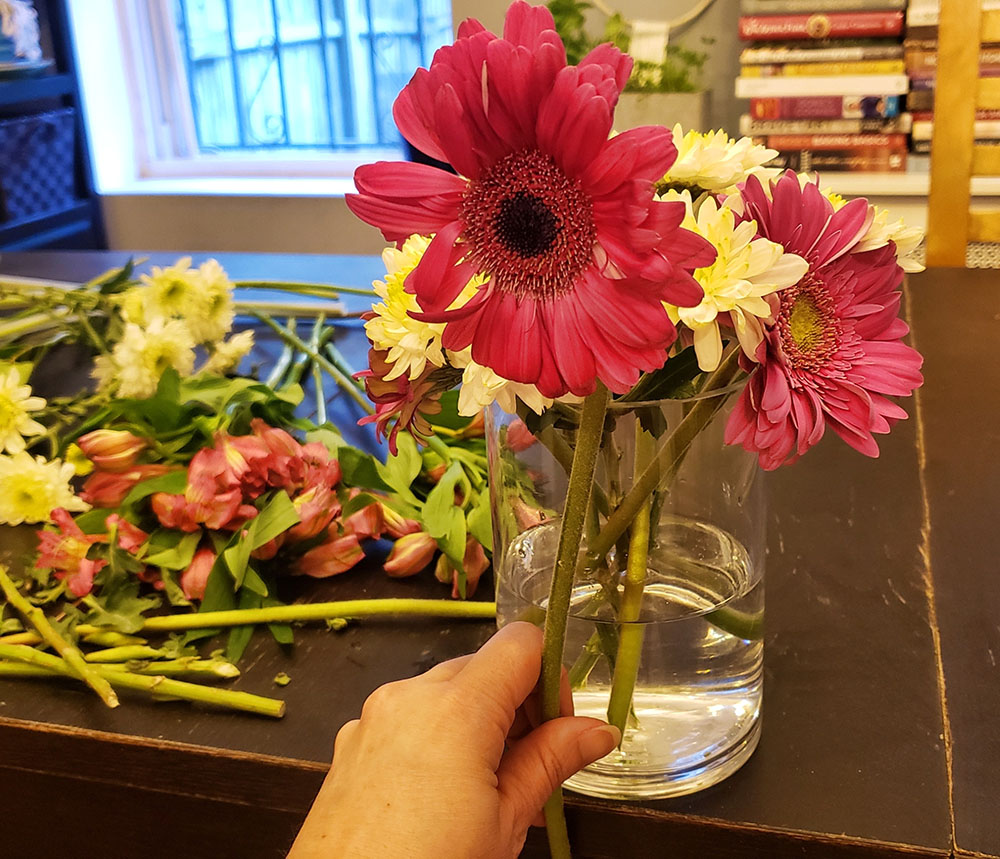 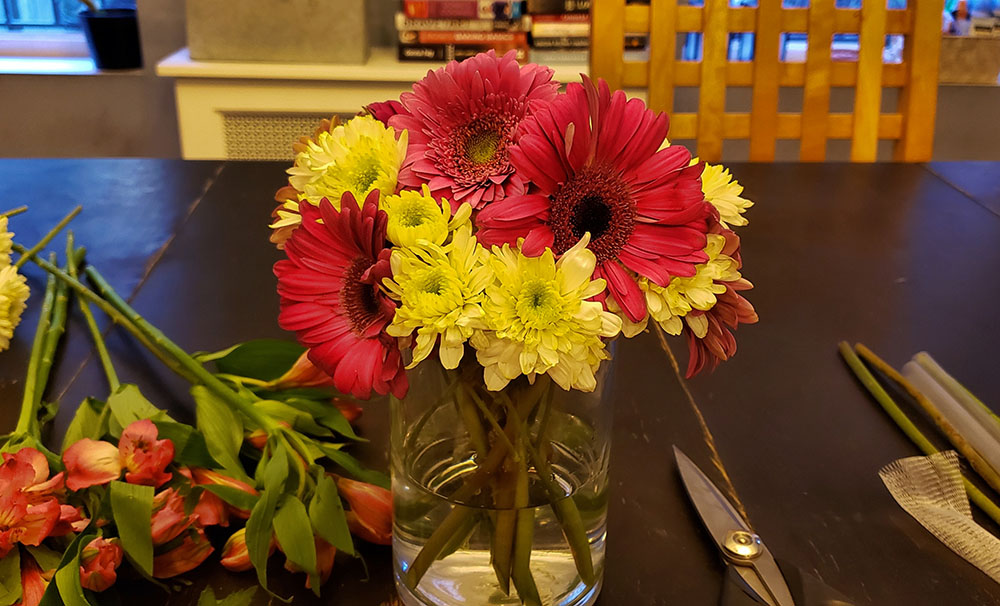 Depending on how many flowers you started with, you may be able to fill 2 or 3 vases.

Did you make this project? I'd love to see it!