You are here: Home » How To Hold Your Phone Correctly For Video On Every Social Media Site

For years, YouTube was THE place for video. And if you held your phone vertically—the tall way—then your video had giant black bars on the sides. I would see people taking their videos the “wrong” way and it was all I could do to not say something.

Now, though, things are more complicated. For some social media sites, you have to hold your phone vertically. In fact, I was at a blogging event about to take Instagram video when another blogger actually took my phone out of my hands and turned it horizontally, telling me that I should always hold my phone that way. A couple of years ago she would have been right, but not anymore. It’s no longer safe to judge which way someone holds their phone, unless you can see which app they’re using.

If you hold your phone the wrong way, you might have ugly black bars on either side of your video. Or worse, it might be sideways. And I want your videos to look good. Not so much that I’m going to put my hands on your phone and turn it the right way, but I will tell you how to hold your phone depending on where the video is going, for all of the social media networks.

OK, not all of them. Every one that I use. The big ones. If you need to know about the other ones, ask a twelve year old.

I tested all of these with an Android camera. I have zero idea if it’s the same for iPhones. I don’t do those.

Don’t like a lot of words? Here’s a summary of what’s below:

For YouTube you definitely want to hold your phone horizontally. There’s just no arguing with that. If you’re watching a vertical video on a computer, there will be ugly black bars on either side of vertical videos. 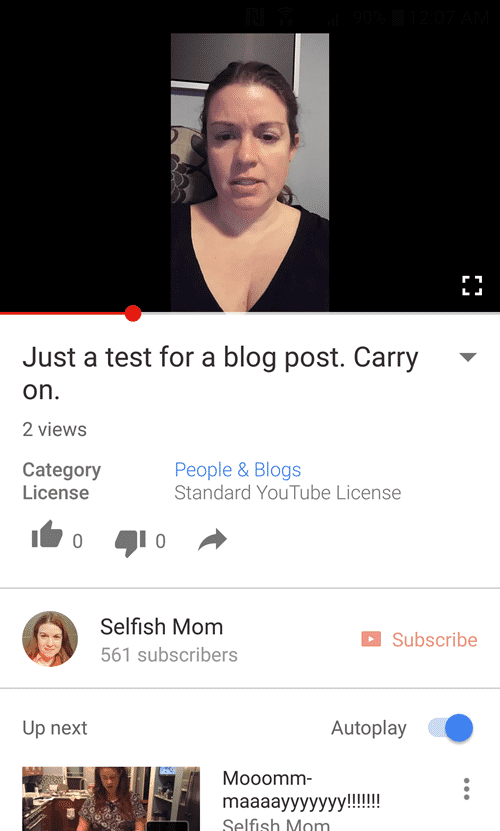 This doesn’t change anything for how you should take your videos, however.

For Instagram, you absolutely need to hold your camera vertically when taking video with the Instagram app. If you don’t, your video will look like this: 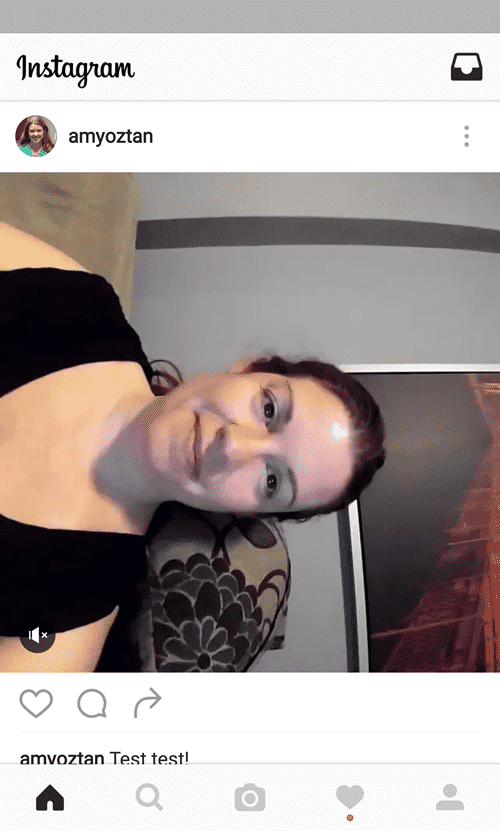 And it makes sense, right? Because when you turn the app sideways, it doesn’t adjust. If it would work both ways, you would think that the words would rotate 90 degrees when you turned your camera. But they don’t.

It gets easier, though, if you want to upload something from  your own camera. Remember, Instagram videos are square. When you upload from your own camera, they will be cropped to fit. But either way, they won’t be sideways.

Verdict: VERTICAL, but you can upload either vertical or horizontal – they’ll just be cropped

However, there is one difference from Instagram: if you upload your own videos, vertical ones will be cropped square, but horizontal ones will show in their full width.

Uploading your own videos to Facebook is similar to YouTube. Vertical videos will actually play vertically, full screen, if you’re watching on a phone while holding the phone vertically. Otherwise, you will have big black bars.

However, if you use the Facebook app to take your video, while you’ll still have black bars for vertical videos, the video will NOT be sideways. (Note that I am not talking about Facebook Live, that’s next. I’m talking about pressing “photo” in the status update box, and then pressing on the little video camera to take a video.)

When you click on “go live” on the Facebook app, if your phone is horizontal, you’ll get a giant hint to turn it vertically: the keyboard, for naming your live video event, will only show vertically. UPDATE: My phone no longer prompts me to turn my phone if I start my video horizontally. You can do video vertically OR horizontally, but however you start it, that’s how you have to do it. If you rotate your phone during the video, you’ll be sideways. As before, look at the “Live” indicator and other writing on the screen.

If you do take your Facebook Live video horizontally, you’ll think it’s fine. I’ve even seen other websites state that it doesn’t matter which way you hold your phone for Facebook Live, since the video is square. But that’s simply not true. People will be watching it sideways and wondering what’s wrong with you. 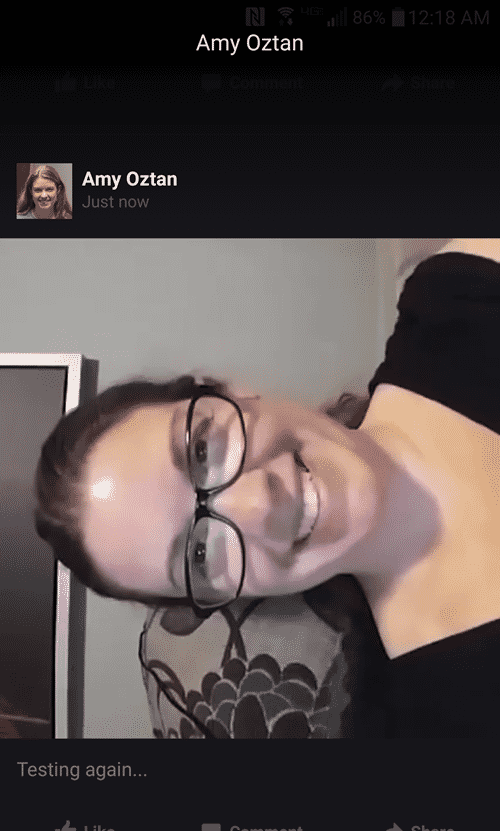 Since Facebook Live is, well, live, uploading videos doesn’t matter for this one.

UPDATED VERDICT: Vertical or Horizontal, but you can’t rotate it mid-video.

Snapchat is meant to be used vertically. Period, end of story.

So there you go. Now go out there and post some videos!! 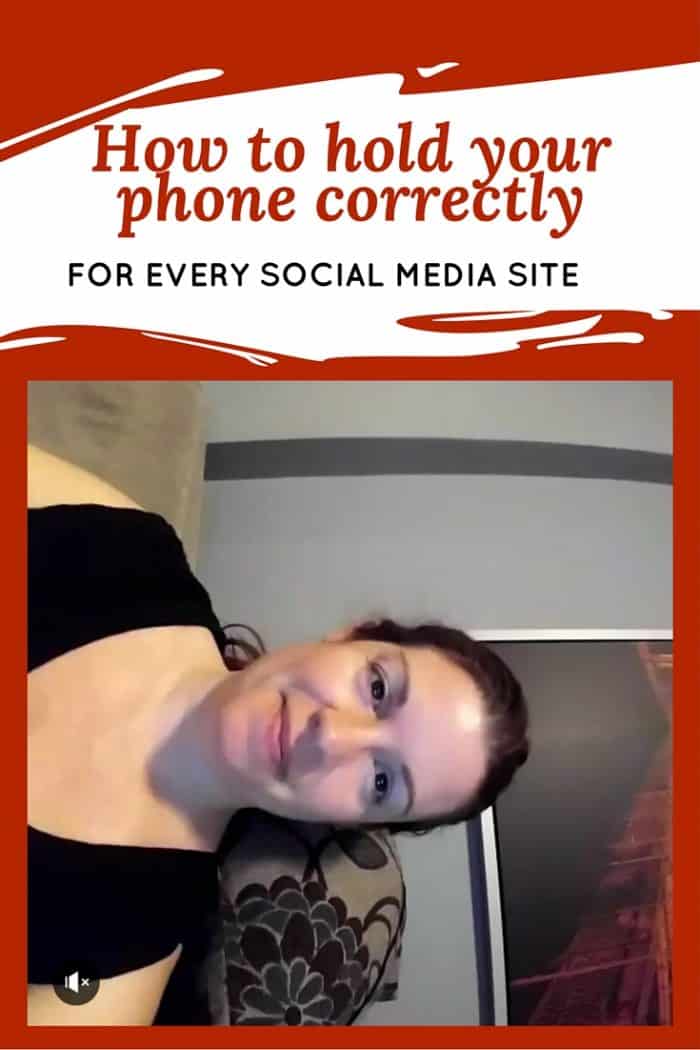 Hi Amy, I came across this post today (September 2021) and it is super helpful! I was wondering if you knew off-hand if this info is still all current and applicable? I wanted to share it with some coworkers who work in the social media field, but thought I should check-in first on if there are any updates. Thank you!

Hi Jenny, I'm guessing most of them are *very* out of date at this point. I'll make a note to update the post, but it probably wouldn't be until October.

Thank you for this! It's so frustrating that you can't flip the videos to work for each platform.

Vertical videos are evil! it's only the policy of Instagram to not let you hold your phone horizontally... If you want to post that video anywhere else it will be ruined forever. Facebook originally was and is a web site! Facebook Live posts your vertical video in a web site where you see the black strips. Now it has started to post normal horizontal videos from life shooting vertically with horizontal stripes!!! what a mess! I think that it's time to get to a standard where the phone automatically records horizontally (and crops if vertical) for all apps... it is possible to write the interface of Instagram so that you just turn your bobile to horizontal. But it's not possible to turn youк monitor in vertical mode

I never have my orientation lock on!

Great post Amy! However, the Facebook one is not strictly true. This is tested with an iPhone, so I'm not sure about other phones.

Give it a test on iOS, but if you have another phone it's worth trying with that too.

Thank you for this post. I am not sure where the Portrait Lock option is located. I don't think I have it turned on. I recently shot a FB Live video while my phone was horizontal. (Does it matter which side you flip it?) but the recorded video turned out horizontal so the video is flipped. Do you have any idea what might have happened?

Thank you, that's a good thing to know. Since I'm not a regular iOS user I didn't think to check the phone's rotation settings. I'll try it out and update.