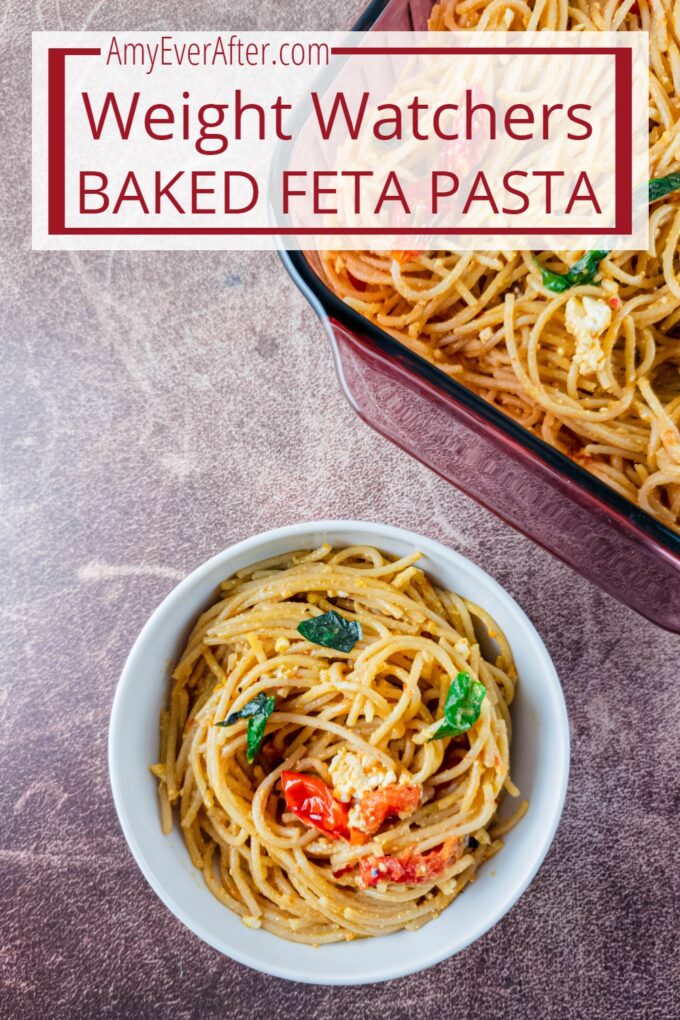 Have you seen the TikTok viral recipe for pasta with feta cheese and cherry tomatoes, and wondered if you could fit it into your Weight Watchers points? Good news: you can! And it’s absolutely delicious.

Is Baked Feta Pasta worth the hype?

If you’ve been on TikTok at all, you’ve probably seen many, many people making the same basic recipe: you put a block of feta cheese into a baking dish with olive oil and cherry tomatoes, bake it until the tomatoes are soft and the feta is melty, and mix it with pasta.

Occasionally on TikTok I’ve seen it made on the stovetop in a pan, but most of the time it’s made in the oven. One of my favorite food writers, Melissa Clark, even made it into a one-pan recipe, where you don’t have to cook the pasta separately on the stove top.

I really wanted to try it, so I tackled the original version to start with. I made it with whole wheat pasta, which is one of the greatest zero-point foods on the Weight Watchers Purple Plan (tied with potatoes!), so the rest was 14 points for a big serving.

This would absolutely be do-able for me some days, but what about those days when I haven’t saved 14 points for dinner? How low could I go on the olive oil and feta until it just wasn’t a tasty dish anymore? How small could I get the points not just for a Purple Plan recipe, but for the other plans as well?

How I turned this into a Weight Watchers recipe

I made this recipe about a dozen times. The first few were just to decide on a great version of the original to work from. Then, I tried version after version with different amounts of feta and olive oil.

After making several versions with the olive oil constant but different amounts of feta, I decided that 5 ounces of feta was as low as I wanted to go (as opposed to 8 ounces in my original version). I desperately wanted it to work with 4 ounces of feta, because I buy feta in 8-ounce blocks, and being able to use half a block appealed to my sense of order. But alas, 5 ounces it had to be.

Once I had the amount of feta set, I started reducing the oil. I liked the flavor enough with 3 tablespoons of olive oil (a huge point drop from 8 tablespoons), but it was very dry. How to compensate?

I decided to increase the tomatoes from 16 ounces to 24. Sure, that’s a LOT of tomatoes, but they taste so good!! And the extra moisture made a big difference. (Don’t feel like measuring the tomatoes? They should just about cover the bottom of a 13x9x2 pan, with room in the middle for the feta).

However, it still wasn’t as creamy as the original. It needed a little something more.

Pasta water is magic. I even keep some in my freezer, in case I forget to save some before I drain my pasta. Whenever I can get the timing right, I try to make sure that my pasta is done cooking just after the other ingredients, so that I can just scoop it right from the pasta pot into the sauce, and not even drain it!

Now, I usually use pasta water in a dish where I’m adding under-cooked pasta to a skillet, and cooking the pasta the rest of the way in the sauce. That method is a bit more forgiving, because if I put in too much pasta water I can cook it off. For this, though, we’re adding the pasta water to a baking dish, so add it a tablespoon at a time, until you get a consistency you’re happy with.

Mixing in some pasta water with the pasta saved my low-point version of Feta Pasta from being a little dry. Sure, it’s not the same as adding 5 more tablespoons of olive oil, but it saves each serving 6 entire points!!

Do you have more points?

If you have more points to play with, you can increase either of those ingredients a bit to fit with your day. I sometimes make a version with 6½ ounces of feta and 4 tablespoons of olive oil for 9 Purple Plan points.

But you can also be confident that at 6 points per serving, this version will be easy and delicious!

There are some substitutions that I experimented with, in case you can’t get these exact ingredients.

This recipe absolutely works with crumbled feta, but if you can get a block, always go with the block. Blocks aren’t covered in anti-caking agents like the crumbled versions are. This can affect both melting and taste.

If you do use crumbled, pile it in the center of the baking dish, and don’t stir it at all while it’s baking.

I love this recipe with whole grain spaghetti, since the sauce clings to it so well. But I also tried it with shorter shapes, and they all worked.

My favorite was Sfoglini Reginetti, an absolutely delicious whole grain pasta. I have a multi-pack of Sfoglini whole grain pasta delivered monthly! Just keep in mind, that particular pasta is sold in 12-ounce boxes, so you’ll need more than one for this recipe. (One note about Sfoglini Whole Grain Pastas and the Weight Watchers Purple Plan, which counts whole wheat pasta as zero points: while the first ingredient for Sfoglini’s Whole Grain Reginetti, Whole Grain Radiators, and Whole Grain Trumpets is whole grain flour, the ingredients list also has durum semolina flour. I don’t know what the proportion is, but the inclusion of durum semolina means that this is not a zero-point food on the WW Purple Plan. However, I didn’t notice this until I’d been eating a lot of it for about six months, and steadily losing weight, so I decided to continue including it in my WW plan as a zero-point food.)

The only ones I would stay away from are hollow shapes like penne, which take up a ton of space and make it more difficult to stir everything together in the baking dish.

Grape tomatoes absolutely work. That’s actually what I use most of the time. Any small tomato will work!

You can substitute a can of cherry tomatoes for fresh, along with the juices in the can. It won’t taste quite the same, but it’s a great way to save money on this recipe!

Using whole wheat pasta only saves one point on the Blue and Green plans, so if you want to use regular pasta, it's not a huge difference.

You can adjust the ingredients and amounts for your plan here: Feta Pasta - Weight Watchers Version